A Tradition of Silence:

Quotes from the Masters 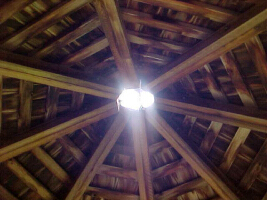 The more I read, the more I surf the web, I am finding an increasing amount of treasure in the words of many magnificent teachers and teachings about silence. I am resonating with these gifts no matter what tradition they come from. There is a commonality of experience and declaration. It is the genuine heart of Spirit speaking here through the ages. The voices differ, the textures differ, and yet the experiential fact is exactly the same. Those who have found Pure Silence: the freedom within, are moved simply to share it. The following are some random texts for your enjoyment and resonance.

"But the perfect reflection of the One is shining by itself in lonely silence, there safely pent as one and indivisible. The unity (of God) is un-necessitous, it has no need of speech, but subsists alone in unbroken silence. The mind is rid of light when it is rid of mode; and it is rid of darkness when letting go of all natural things, it sinks in nameless actuality. Then it loses both light and darkness in the abyss that a creature in its own right never plumbs. Such is the estrangement in one as foreshadowed in the ordinary mind, but the realization of unity which the blessed have lies in the exquisite consciousness of another than themselves. O unfathomable void, bottomless to creatures and to thine own self, in thy depth art thou exalted in thy impartible, imperishable actuality; in the height of thy essential power thou art so deep thou dost engulf thy simple ground which is there concealed from all that thou are not; yet those whom thou wouldest commune with shall know thee with thyself."

"This silence, this moment, every moment, if it's genuinely inside you, brings what you need. There's nothing to believe. Only when I stopped believing in myself did I come into this beauty. Sit quietly, and listen for a voice that will say, 'Be more silent.' Die and be quiet. Quietness is the surest sign that you've died. Your old life was a frantic running from silence. Move outside the tangle of fear-thinking. Live in silence."

"In listening and stillness there is nobody who is still, and this stillness doesn't refer to any object; it is absolutely objectless; it is our real nature."

"Silence is the language God speaks and everything else is a bad translation."

"Be quiet in your mind, quiet in your senses, and also quiet in your body. Then, when all these are quiet, don't do anything. In that state truth will reveal itself to you. It will appear in front of you and ask," what do you want?"

"Empty yourself of everything. Let the mind rest at peace. The ten thousand things rise and fall while the Self watches their return. They grow and flourish and then return to the source. Returning to the source is stillness, which is the way of nature."

"Go into your room, and when you have shut the door, pray to your Father who is in the Secret Place."

"Learn to get in touch with the silence within yourself and know that everything in this life has a purpose. There is no need to go to India or anywhere else to find peace. You will find that deep place of silence right in your room, your garden or even your bathtub."

"True silence is the rest of the mind; it is to the spirit what sleep is to the body, nourishment and refreshment."

"Things that are real are given and received in Silence. God has been everlastingly working in Silence, unobserved, unheard, except by those who experience His Infinite Silence."

"Silence is the great teacher, and to learn its lessons you must pay attention to it. There is no substitute for the creative inspiration, knowledge, and stability that come from knowing how to contact your core of inner silence."

"In the attitude of silence the soul finds the path in a clearer light, and what is elusive and deceptive resolves itself into crystal clearness."

"Silence is the language of God;

It is also the language of the heart."

Silence preserved is Our Tradition

Silence given is Initiating

"How then are we going to reach God? How, but in quietness and in confidence, in the stillness and the Silence? How, but by learning to abide in a quietness within, by being still."

"If only all might be hushed, sense impressions, the soul itself,
all imagery, all symbols, all things transient, then we might
hear the very voice of the eternal, and if that experience were prolonged, we would indeed enter into the joy of our Lord."

"Passion is overcome only by him who has won through stillness of spirit the perfect vision; it comes through the contentment that is regardless of the world."

"Thought comes to an end. Then there is that sense of absolute silence in the brain. All the movement of thought has ended."

"There is a silence into which the world cannot intrude. There is an ancient peace you carry in your heart and have not lost."

A Course in Miracles

"...[] remember, in the face of Mystery, silence ultimately alone will do: you simply cannot categorize, in ANY way, that which is radically Unqualifiable. You know that Mystery by being Emptiness, not by conceptualizing it, naming it, labeling it."

"Whenever we moderns pause for a moment, and enter the silence, and listen very carefully, the glimmer of our deepest nature begins to shine forth, and we are introduced to the mysteries of the deep, the call of the within, the infinite radiance of a splendor that time and space forgot"

"There is nothing mind can do that cannot be better done in the mind's immobility and thought-free stillness.

When mind is still, then truth gets her chance to be heard in the purity of the silence."

"Silence is ancient. Silence has been in the space you
are at this very moment for longer than anything else
has. It will remain after you leave and exist long after
all other things have faded."

"There is something beyond our mind which abides in silence within our mind. It is the supreme mystery beyond thought. Let one's mind and one's subtle body rest upon that and not rest on anything else."

From the Maitri Upanishad

"Real action is done in moments of silence."
Emerson

"For the ignorant there is no better rule than silence and if he knew its advantage he would not be ignorant."
Saadi

No, my soul is not asleep.
It is awake, wide awake.
It neither sleeps nor dreams, but watches,
its eyes wide open
far off things, and listens
at the shores of the great silence.

"Silence is the universal refuge, the sequel to all dull discourses and all foolish acts, a balm to our every chagrin, as welcome after satiety as after disappointment; that background which the painter may not daub, be he master or bungler, and which, however awkward a figure we may have made in the foreground, remains ever our inviolable asylum, where no indignity can assail, no personality can disturb us."

"Under all speech that is good for anything there lies a silence that is better. Silence is deep as Eternity; speech is shallow as Time."

"A tremendous "knowing" comes effortlessly into the mind when it falls into Silence, when it gives up trying to understand, when its reel of stored images no longer projects abstract pictures onto the clean screen of simplicity.

This kind of knowing is transmitted to us as pure revelation, as a clarity untouched by words or other symbols of meaning. When we allow this knowing into our minds, our very lives become as clear and startling as this knowing." Robert Rabbin

"Silence is the essential condition of happiness." A Zen Master

Inner silence works from the moment you begin to accrue it. What the old sorcerers were after was the final dramatic, end result of reaching that individual threshold of silence. Some very talented practitioners need only a few minutes of silence to reach that coveted goal. Others, less talented, need long periods of silence, perhaps more than one hour of quietude, before they reach the desired result. The desired result is what the old sorcerers called "stopping the world", the moment when everything around us ceases to be what it's always been. This is the moment when sorcerers return to the TRUE nature of man. The old sorcerers always called it "total freedom"
Don Juan (Carlos Castanada)

Concepts can at best only serve to negate one another, as one thorn is used to remove another, and then be thrown away. Only in deep silence do we leave concepts behind. Words and language deal only with concepts, and cannot approach Reality. Ramesh Balsekar

One realizes the Absolute as one's true identity, totally beyond all manifestations, but containing them within its mysterious vastness. The emphasis is on the transcendence of the world, including the body and mind. One becomes the immense solidity of the absolute, totally still and inactive, while dispassionately witnessing the play of all phenomena. [One] witnesses all phenomena as the dynamic transformation of a cosmic and boundless consciousness, which consciousness arises in [its] silent immensity as a surface phenomenon. In the vastness of silence, the world arises in all its multiplicity, but all the world is made out of a conscious presence, a Presence which is a consciousness that can reflect on itself.

Your chances of discovering this inner silence serendipitously, are slim. You could get a taste of it when your hand unexpectedly gets caught in a lawn mower or something. You are jolted into silence, and your whole thought process gets interrupted for a few moments. Or you may have a glimpse of it when you jump out of a plane for the first time. Or when you jump out for the 31st time, but now your chute fails to open. In these extreme situations your mind might go into spontaneous silence, a silence in which you are acutely aware. Your inner dialogue can come to a halt because of radical circumstance. And in a way it's a thrill. This silence in your brain, this acute awareness, is so refreshing, replenishing.

Silence is the mother of everything that has come out from the Depth. And Silence kept quiet about what she was unable to describe: the Unspeakable. ~Clement of Alexandria

If I were to say "God exists," this would not be true. He is beyond being. He is a no-thing-ness beyond being. This is why St. Augustine says "The best thing to be said about God is silence." You must love God as not-God, not-Spirit, not-Sun, not-image, but as He is - sheer, pure absolute Oneness, without any duality." Meister Eckhart.

Be very careful. The subject that can be seen is not your
home-ground. What is sometimes called the ultimate subject
is nothing other than silence, sunyata, emptiness of images.
This is consciousness, the light behind all perception.
The subject that is talked about is still in duality, the
subject-object relationship.
Jean Klein

I shall update this page as more quotes appear.

Joy and Gentleness to you and yours.